We do everything together, including NEBOSH!


The vows of marriage include a commitment to love and to cherish, but we’re pretty sure they don’t say you have to do your NEBOSH qualifications together! However, that hasn’t stopped Linda and Edward Fendt. 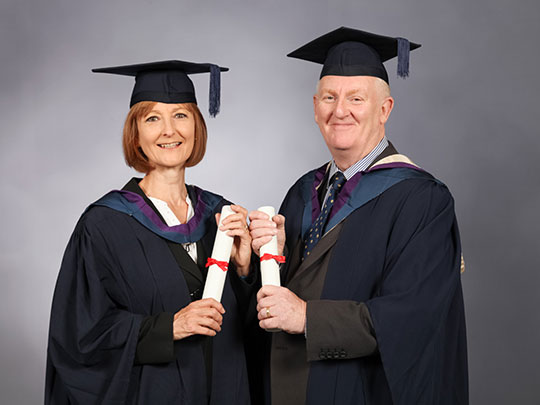 The couple from Kent, UK, who have been married for nearly 20 years, simply love doing things together. They enjoy travelling, going out for walks and spending time with their grandchildren, but their togetherness extends way beyond these standard pursuits.

“We’re never apart,” said Ed. “At one point we even worked together and people would say, don’t you see enough of each other already? But I have to be honest, I say thank you every day for having Linda in my life. She is truly amazing!”

Linda feels the same, telling us that “every day is Valentine’s Day with Ed,” but the clear romantic affection they hold for each other also manifests itself in a really practical way. It all began when they started doing night classes together “for fun’ many years ago. They learned languages, such as Arabic, and then Linda, who loves being “hands on,” suggested they did a bricklaying course, followed by a level 2 in welding! According to Ed, Linda excelled at welding and was “the best in the class.”

Then, Ed, who is now Director of H&S for WT Partnership and has been a health and safety professional for many years, decided to take the NEBOSH National Certificate in Construction Health and Safety to support his career development. Linda naturally supported him in his studies. “She took a real interest in it and would help me revise by asking me questions. It reached the point where I said ‘you’re getting really good at this, why don’t you take the exam as well?” explained Ed.

Linda works for the social housing organisation CityWest Homes, and even though she does not have a full-time health and safety position, she thought it wouldn’t do any harm to take the qualification. “I found it really interesting, so yes we took the exam together and both passed.”

They both went on to take the NEBOSH Certificate in Environmental Management. The qualification was useful for Linda because corporate governance is key to her role and it appealed to Ed as environmental management was an increasingly significant part of his remit at work.

When Ed chose to take the NEBOSH National Diploma in Occupational Health and Safety, Linda decided to be Ed’s main supporter rather than his study partner. However, when it came to Ed’s graduation day, Linda thought it would have been a nice thing to have experienced together.

“Whenever I looked at the photo of him on the wall at home in his hat and gown I thought wouldn’t it be lovely if one day we had a picture like that of us both.”

This wish came true when Linda and Ed both attended the 2018 NEBOSH Graduation Ceremony after passing the NEBOSH National Diploma in Environmental Management with Credit.

“It was a really special day for us,” said Linda. “I never imagined I would ever graduate and to receive my Diploma with Ed was so lovely, even a little romantic!”

Also laughing, Ed adds: “I remember saying to Linda ‘I hope we can walk across the stage together at Graduation’ and she said, ‘don’t worry, you’re Fendt E, I’m Fendt L, so there’s no one coming between us!’ I’m so proud of what she has achieved. NEBOSH qualifications are hugely respected and they have helped in both our careers. But perhaps more than that, they’ve given us great pleasure and a challenge that we have both enjoyed facing together.”

I love it when a plan comes together

For our latest interview we spoke to David McCulloch, Group HSSEQ Manager for NRC Environmental Services Ltd about his career and the part NEBOSH qualifications have played.

It became clear that the International General Certificate in Occupational Health and Safety was the most valued OSH certificate in the Middle East!

NEBOSH spoke to Nishanth. P, Project Health & Safety Manager for Gulf Contracting Co. W.L.L. We find out why Nishanth chose a career in health and safety and how this led him to be based in in the Middle East.