Some projects can be described as ‘big’. However, some are more deserving of the words ‘huge’, ‘significant’ and ‘iconic’. HS2 is one project worthy of this moniker. It is one of the world’s largest infrastructure programmes of our time. It will link London by high speed rail to Birmingham, the East Midlands, Leeds, Sheffield and Manchester at a cost of around £80billion. 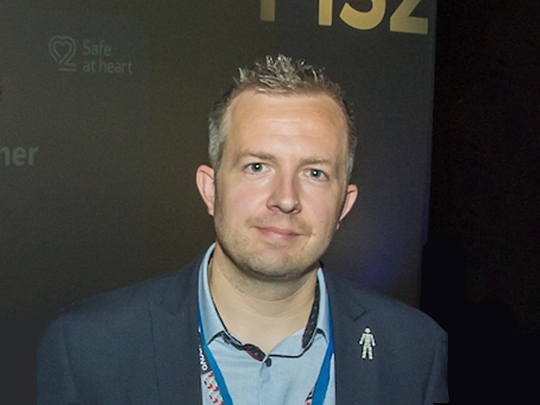 Dan Platten, is a Health, Safety and Security Director at SCS Railways (Skanska Costain Strabag Joint Venture) and has responsibility for ensuring a key part of the project is delivered safely. With a budget of £2.5 billion, HS2 Main Works Lots S1 and S2 is concerned with the creation of 20 kilometres of tunnels underneath central London, which will be created by 6 Tunnel Boring Machines running at the same time. It’s fair to say that Dan’s role in the project means he has a lot to do!

It’s exactly the kind of high profile and demanding work that Dan wants. He is one of those people who wants to be at the very top of his game. Not for bragging rights, but simply because that is what motivates him. If he was an athlete, he would be striving for the Olympics, similarly if he was a footballer only a place at a Champions League club would do.

“I want to do be the best I can be, which is why I joined Skanska originally and then agreed to be part of SCS Railways. Both are at the forefront of innovation in all areas, including health and safety. I want to work on iconic projects, so that later in life my family and I can look back and say I was part of that. They are great for society and all of that combined is what drives me.”

After graduating with a Construction, Engineering and Management Degree from Loughborough University in 2003, Dan worked in construction management for several years. He managed ‘big’ projects which incorporated an element of health and safety responsibility, for various leading construction companies. He thoroughly enjoyed the health and safety side and was asked to take his NEBOSH National Certificate in Construction Health and Safety in 2004. Shortly after passing this qualification he was offered a Health and Safety Advisor position by his employer. He went on to completed the NEBOSH Diploma in Environmental Management and NEBOSH National Diploma in Occupational Health and Safety.

“After completing my Diplomas we overhauled the company’s policies and procedures and implemented ISO 18001. I have to say, the qualifications were incredibly helpful, particularly for the legal side. They not only give you the knowledge you need to do things, but also help you to fully understand why you need to do them. This aspect is key for employers, and is why I believe NEBOSH Diplomas are so highly valued. Achieving a NEBOSH Diploma level qualification is something that makes you stand out. When I am recruiting new team members it is something I ask about.”

While working at Lend Lease between 2011 and 2015, Dan helped to reduce his business unit’s Lost Time Injury (LTI) frequency rate by 85% and RIDDOR by 77%, whilst also achieving 11 months critical incident free and reducing their critical frequency rate by 59%. Dan is now using his experience to draw up and implement the Health and Safety Strategy for SCS Railways as well as ensuring Health and Safety is well managed throughout the design phase.

“It’s been hugely important to me having the NEBOSH Diploma,” Dan told us. “All of the principles that you are taught apply in whichever industry you work. I still refer back to my notes and folders and when you reach a strategic level you use both your experience and your knowledge from your Diploma to make critical decisions.”

“For me, NEBOSH is the ‘Rolls Royce’ of qualifications. It’s industry leading and the most recognised because of the quality it gives. Yes, there are other paths you can follow, but I have to say that if like me you want to work on big iconic projects, you have to have big iconic qualifications. I wouldn’t be where I am today without NEBOSH, it’s as simple as that.”