No one in Claire Jones’ family had ever stayed on at school past the age of 16. So she hardly gave sixth form a second thought, despite gaining a reasonable set of O levels in 1986. 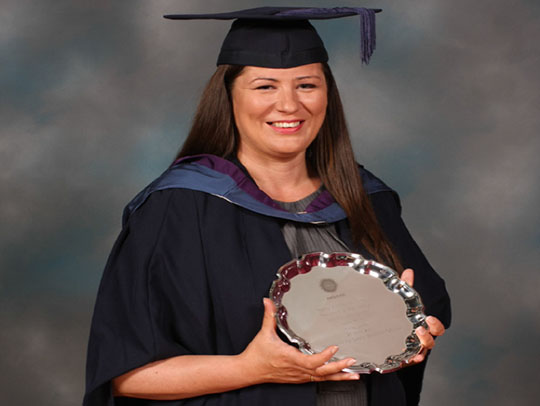 Instead, just like her 6 brothers and sisters after her, Claire went looking for a job. She managed to find a YTS position with a local chemical company in West Cumbria where she worked as a junior process operator. She impressed her employer, won a YTS Trainee of the Year Award and was kept on.

Claire began to realise her lack of higher level education might hold her back. She wanted a career, so set out to achieve a set of qualifications that would take her further. This began with an ONC in chemical engineering - equivalent to an A level - then a HNC in chemistry and an honours degree in chemistry in 1994.

Claire got the promotions she was after, to assistant development chemist and then to assistant technical sales manager. She enjoyed sales. Claire is a people person. She also enjoyed the travelling that went with the job.

Unfortunately, in the early 90s her employers decided to embark on bulk manufacturing, withdrawing from the areas where Claire was responsible. They did not want to let her go, so offered her a temporary role in health and safety until something more suitable came up in the technical field.

Claire admits she was “devastated” by this. She had a stereotypical view of health and safety at the time - “all clipboards and interfering!” Fortunately Claire had a good manager, who recognised her desire for learning. He suggested she did a NEBOSH General Certificate.

The course changed Claire’s mind completely. She wanted to know more and began to see health and safety as a challenge that really suited her. She was also strongly affected by an incident at work. A popular colleague fell from height and was severely injured. The incident angered everyone at the plant and she was determined to do all she could to stop something like that happening again.

One area she found particularly interesting was fire safety. As well as being fascinated by the subject, she enjoyed working closely with the local fire brigade. The other girls at the plant used to look on with envy whenever she got to show them around!

Claire was appointed safety adviser in 1995 and became safety manager in 2000. In 2005 the plant where Claire worked closed and she had to find a new job. For a while she worked for a contractor at the Sellafield plant.

The Sellafield Ltd safety team were impressed by her knowledge and experience, so they offered her a position there in 2007.

She’s now a Construction EHS Improvements Manager employed by Sellafield Ltd. Her collection of NEBOSH qualifications has grown considerably. She’s passed her Diploma with credit, as well as the National Certificate in Construction Safety and Health, again with credit.

In 2009 she not only gained her NEBOSH Certificate in Fire Safety and Risk Management, but passed with distinction and achieved the highest mark award.

Claire isn’t stopping there either. She’s just passed her NEBOSH Environmental Certificate with distinction, which leaves only the Environmental Diploma for what would be pretty much a full set! Not bad for someone who didn’t give a lot of thought to further education when she left school. Well done Claire, we’re impressed!