The social movement, Time to Change, estimates that every year around 1 in 4 British workers are affected by a mental health condition such as anxiety, depression and stress. Its research also shows that 90% face stigma and discrimination as a result; something that the group is campaigning to change. 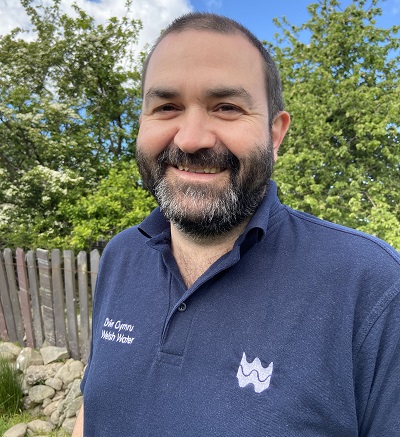 One way it is challenging mental health discrimination is by encouraging companies to make a “Time to Change Employer Pledge” to positively influence how we act and think about mental health in the workplace. So far over 1,400 British companies have signed up.

Welsh Water, the sixth largest regulated water and sewerage company in England and Wales, is one company that has made the pledge. Every year it runs a Mental Health campaign to turn its commitment into a reality. We caught up with NEBOSH Alumni Member Trystan Lewis -Williams (pictured), one of its Senior Health and Safety Advisors, who played a pivotal role in the development and rollout of the 2020 campaign.

I worked on this campaign with colleagues from our internal communications and talent development teams. When we first met a few months prior to launch, we agreed that awareness of mental health was generally high in our company because of successful campaigns that have been rolled out previously. However, there was evidence of some reticence to start conversations about mental health with colleagues for fear of saying the wrong thing.  We agreed that this should be the focus of the campaign in 2020.

The following business and communication objectives were agreed at the outset:

We wanted the campaign to get our people talking about mental health, break down any taboos and highlight how we can support them.  It needed a hook though that was simple and memorable which everyone could get behind. After much thought we settled upon the question “Are you ok?” as by asking it, you show you care and are there to listen. Opening up can be an important first step that can give someone the confidence needed to seek further help or assistance. 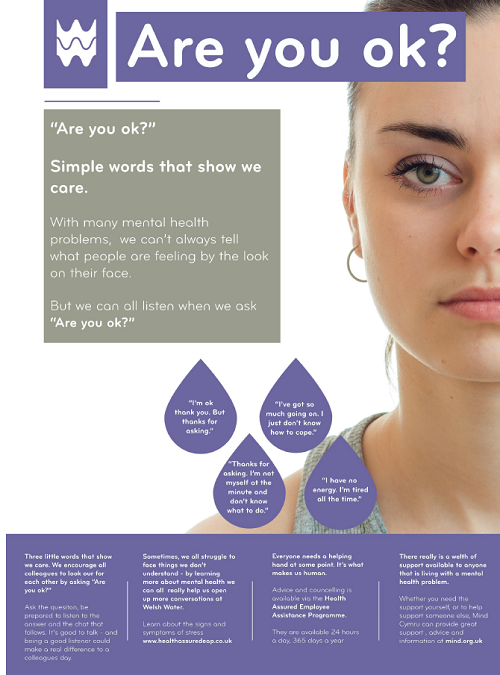 The campaign was launched with an email to all colleagues from Welsh Water’s CEO Peter Perry. It was great to be able to demonstrate that the campaign was supported at the very top of the organisation from the outset.

We developed a presentation so managers could easily run through the key messages with their teams. This helped to reinforce the message and start conversations.

We used blogs on our intranet and posters prominently displayed across our sites to reinforce the messages. The posters incorporated QR codes which enabled colleagues to easily access emergency advice from a digital wallet. The use of this technology helped get more detailed information to those who needed it.

We had planned to have Positive Mental Health talks broadcast across 6 main sites too, but these have had to be postponed to next year due to Covid-19.

We also have 18 colleagues who are trained as Wellbeing Champions. They are vital in promoting wellbeing and supporting our colleagues.

The Covid-19 crisis has delayed the execution of some elements of the campaign. We have adapted as a company and provided lots of mental health support and information by a number of alternative means. We have already received positive feedback from colleagues about the aspects of the campaign we have rolled out. The presentation and posters have proved to be particularly popular.

The articles and blogs on the Welsh Water intranet system have been viewed 100’s of times already.

The real test of the campaign’s success is if it will positively impact the health, safety and wellbeing of our people which is the most important thing to us here at Welsh Water. The early indicators suggest that ‘Are you ok?’ has been well received and is encouraging more open conversations which in turn will increase the take up of the supporting resources we have put in place.

Advice for health and safety professionals:

As part of our Do Something Great careers campaign we teamed up with four expert guests from the health and safety industry to record a careers roundtable video.

COVID-19 update: Caring for our learners, Learning Partners and employees