“If you give the future of health and safety to young people, it will be in safe hands” – Joanne Shepherd, Health and Safety Manager at Blackpool and The Flyde College (B&FC) and LOcHER Steering Group member 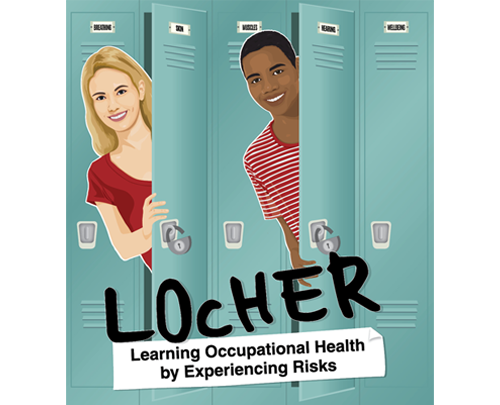 No one would argue with the need to empower young people about the importance of sustainable working lives, but the question of how to foster an enthusiasm for occupational safety and health has long challenged educators – just as it challenges risk management professionals in the workplace. Today’s students have grown up on a near-exclusive diet of negative news stories and media-inflated outrage about safety “rules” restricting freedoms and trouncing common sense. And anyway, health and safety is just dull, isn’t it?

Enter “LOcHER” – Learning Occupational Health by Experiencing Risks – a new approach in which students and apprentices identify the health and safety risks in their subject area; learn about those risks; and then showcase their ideas about how to control them. Groups participating in the project have the freedom to present their work in any way they choose: so far, students have produced an asbestos film, a PPE rap, a dermatitis board game and even mental-health-themed cupcakes.

The idea for LOcHER came to Bob Rajan, Principal Inspector and strategist at the Health and Safety Executive (HSE), and Vice Chair, Safety Groups UK (SGUK) on a flight home from Australia in December 2013. “I started to wonder: if we invested more in young people – instead of focusing only on workers – could we save ourselves a lot of hassle in the future? So LOcHER was born in the air!”

A hands-on, student-led approach, LOcHER seeks to capture attention in a way that PowerPoint slides and toolbox talks rarely do. It provides practical experience that participants can then transfer to the workplace. “It’s about students engaging, discovering and experiencing risk on their own,” Bob explains.

The programme has huge potential benefits. It raises risk awareness at an age when individuals are receptive to learning, but it also harnesses students’ capacity for innovation. A LOcHER group at B&FC came up with the idea of dyeing barrier cream to make it easy to detect whether workers are using it – an idea that is being developed further.

Placing active learning in the hands of the students changes the usual dynamic, observes Barry Wilkes, Director of Strategy at NEBOSH and member of the LOcHER steering group. “It’s about getting away from health and safety being seen as a dull, grey subject,” he says, “and asking students how they want to learn. They have control.”

“What makes LOcHER different is the degree of personal involvement of the students,” agrees Andy Cathro, who ran the first pilot in Scotland at Dundee and Angus College. “It’s creative learning.

“When we did the first project, it just blew me away. I saw what the young people achieved – going from knowing nothing about a subject to being able to talk confidently about it and use all the technical terms – and it got me hooked.”

The lag between exposure to certain hazards and the appearance of ill-health symptoms makes it all too easy for inexperienced workers to adopt a cavalier attitude to risks.

“Who didn’t feel invincible when they were 18?” points out Joanne Shepherd, Health and Safety Manager at B&FC, which is in its third year of running LOcHER projects. “It can be hard to get students to take long-latency issues seriously.”

LOcHER’s Steering Group – which includes representatives from NEBOSH, RoSPA, HSE and further education colleges – hopes to instil in students the mindset that they need to take steps to protect their health from the very start of their working lives.

When developing the programme, the Steering Group was clear that if the project were to be successful in winning hearts and minds – changing attitudes and embedding learning firmly in students’ long-term memories – it needed to be “emotionally attractive”. So students are given free reign over how they learn, and how they record and communicate their findings.

“Because students are engaging with and discovering risks (in safe ways) for themselves, what they experience stays in their long-term memories and the desired behaviours become automatic,” explains Bob Rajan. “It’s about engaging the ‘system 1 mind’ – the fast, instinctive response – so that when they face a problem in the future, it all comes back to them.”

The first trial project in Scotland was at Dundee and Angus College and involved a group of Prince’s Trust students.

"I sat them down and asked, ‘What do you know about asbestos?’,” recalls Andy Cathro. “Some knew a bit about it; some had never heard of it. So I told them to go and do some research: to use their phones and find out as much as they could.”

The group visited an asbestos testing facility, a licensed asbestos-removal contractor and a charity that supports people made ill through asbestos exposure. They borrowed a camera from the college, and the result was a short film for their peers that has not only been shared within the UK and abroad, but has also won recognition in the form of an innovation trophy from Safety Groups UK.

“The course the Prince’s Trust students were on was designed to help them into education or employment,” Andy explains. “The experience of taking part in LOcHER – the public speaking, research, teamwork – totally changed their lives.”

Since the initial pilot, Andy has worked with various groups of students, including hairdressing and engineering students. He has also run successful LOcHER projects with school pupils in home economics lessons. The participants decided to make cupcakes featuring hazard symbols: you could only eat one if you could correctly identify the symbol’s meaning. The group has since made cupcakes promoting positive mental health messages and have presented these at a Scottish Parliament event.

New entrants to the world of work have the advantage of being able to cast fresh eyes on old problems – and the evidence is that they can come up with truly innovative ideas.

The simple solutions students develop while participating in LOcHER won’t only be of benefit to them, but to their peers, colleagues and employers.

Bob Rajan describes LOcHER as being in its “consolidation phase”. The Steering Group is looking to develop a simple demonstration tool kits based on the ideas students have come up with so far to tackle five key risks to health, which are risks to: breathing; skin; hearing; muscles and bones; and health and wellbeing. The aim is to encourage all FE colleges and awarding bodies to apply the LOcHER approach in teaching and training H&S.

NEBOSH is supporting the development of the LOcHER website, to make it a hub for material from all the different participating colleges – with the hope of encouraging more lecturers and students to adopt LOcHER.

“If you give the future of health and safety to young people, it will be in safe hands,” concludes Joanne Shepherd. “They’re going to come up with ideas to tackle problems we haven’t solved. But we have to engage them early.”

At B&FC, Health and Safety Manager Joanne Shepherd added an extra element when she rolled out LOcHER.

“We’re in our third year of running LOcHER projects now, but we do it slightly differently,” she explains. “I’ve always thought a little bit of healthy competition goes a long way, so when we introduced the concept, we promoted it to all the different curriculum areas as a competition.”

Each participating group has 15 minutes to present its project to a panel of experts, including representatives from the HSE and industry, then there’s a five-minute question-and-answer session. The panel judges the entries and chooses the winner and runners-up.

In the first year there were 10 entries. These included a submission on the management of nits among nursery workers (entitled “Itching time over!”); and a presentation on health-promotion apps, for which students quizzed staff on what they ate for lunch and how they tried to keep healthy before introducing them to the apps available and then assessing the improvements they made as a result. The winning project came from a group of construction students, who presented their work as a rap about PPE.

“In the second year, we were inundated with 23 entries, which was brilliant,” says Joanne. “We took 11 forward to the final, and the standard and quality of the presentations just amazed me: I was utterly thrilled! The second-place team was a group of engineering students that created a dermatitis board game which the whole panel enjoyed playing. The winning group, also engineering students, looked at the problem of how you know whether people are wearing barrier cream, and they came up with the idea of dyeing it – and the idea that is being developed further.”

The competition goes from strength to strength and is firmly established at B&FC.

“All courses have a health and safety element. In the past it’s been the bit lecturers don’t like to teach. But now we give them LOcHER, they have a way to make it really interesting.”

Dave Foy, Health and Safety and Estates Manager at the Prestons’ College summarises LOcHER and its benefits:

“For me, LOcHER is so much more than just a way to teach Health and Safety as part of a course. The concept and the process allow students to develop their communication skills. Watching students evolve over a few weeks from ‘rolling their eyes’ at the thought of doing ‘elf n safety’ to actually wanting to stand in front of their peer group and others to talk confidently about their learning and to share their messages is amazing”.

The LOcHER philosophy is about…

Blog: A safety career across borders

Originally from Pakistan, Umer Changaiz’s safety career has taken him to many countries. Now QHSE Supervisor in Saudi Arabia for SNC-Lavalin, a global engineering company, Umer shares his experience of getting started in the profession and working in different countries.

Not only have our learners been able to stay safe while achieving their NEBOSH qualifications but we’ve reduced our environmental impact as well!