Professional qualifications appear to make a considerable difference to the level of salaries available to health and safety managers. 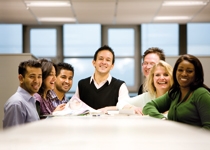 Where applicants were required to hold a NEBOSH Diploma qualification, the average top end salary was £50,000, more than 16% higher than £43,000 (the average top-end salary when a Diploma was not specified). Overall, 83% of job advertisements insisted on candidates holding some form of NEBOSH qualification, with 54% of these specifying the degree equivalent NEBOSH Diploma, a proportion which is broadly similar to previous years.

The research also found that around one in every 7 nationally advertised safety, health and environmental (SHE) job opportunities in the UK currently fall within the retail or property management sectors. This represents considerable growth in career opportunities in these sectors compared to 12 months ago.

Overall, construction and civil engineering continue to be the dominant sectors for SHE positions, accounting for 39% of available jobs, up from 29% last year. Manufacturing is the second biggest sector for SHE roles at 20%, up from 13% in 2015. Property management accounted for 8% of vacancies, retail (6%), utilities (4%) and the charitable sector (4%).

“Once again we are seeing employers demanding professional qualifications and a clear willingness to reward those who value their continuing professional development with better salaries,” said NEBOSH Chief Executive Teresa Budworth.

Out of all nationally advertised SHE positions, one third (32%) were in London, down from 42% last year. Second was the surrounding South East region at 20%, a similar figure to 2015. By far the biggest increase in vacancies was seen in the North West, at 19% compared to just 8% in 2015. There was also growth in Scotland, up from 3% to 7%. One in 8 (12%) of vacancies were in the Midlands, followed by 5% in the South West & Wales and 5% in Yorkshire and the North East.

Almost half (45%) of vacancies called for a range of NEBOSH Certificate level qualifications, up from 38% last year and 33% in 2014. Overall, 93% of positions asked for either some form of NEBOSH qualification and/or Membership of IOSH.

NEBOSH will be exhibiting at this year's Safety and Health Expo from 21 – 23 June on stand N2350 at Excel London, where you will be able to find details of the range of NEBOSH qualifications now available. Also see www.nebosh.org.uk/qualifications

NEBOSH has launched a new globally relevant fire safety qualification which can be completed in just one week!

NEBOSH Working with Wellbeing, a new one-day introductory qualification from NEBOSH, will give managers the skills to help them proactively and effectively influence employee wellbeing.