From Boxing Belts to NEBOSH Qualifications


In his early twenties, Orkhan Babashov collected a number of ‘championship trophies’ as an amateur boxer in Azerbaijan. 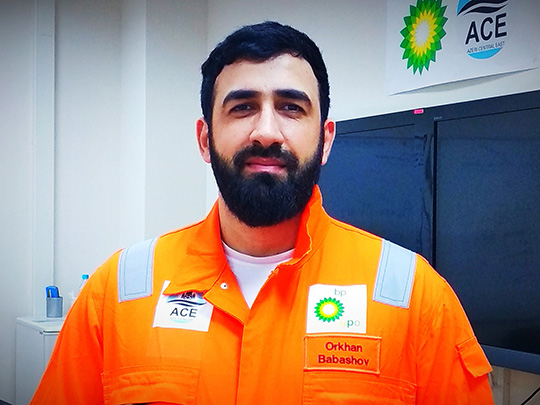 Now, aged 28, he has a different set of goals and aspirations and is building an impressive collection of NEBOSH qualifications instead.

When you hear the difference NEBOSH has made to Orkhan’s life, it is easy to understand why he has put a great deal of time and effort into his studies.

Orkhan lives in Baku, the capital city of Azerbaijan. He began his working life as a trainee accountant. But after two years he decided to look for something different. He was strong on languages and IT, and had some success as both an English translator and as a computer sales representative.

However, Orkhan was aware that the best and most dynamic careers in Azerbaijan could be found in oil and gas, construction and telecommunications. So when he came across a job opportunity with Rapid Solutions, a UK specialist engineering company operating in the region, he decided to apply.

Orkhan distinctly remembers being asked at his job interview if he had heard of NEBOSH. “I knew nothing about NEBOSH at the time, but I immediately got a sense of its importance for the role and decided to look into it straightaway,” he told us.

He decided to take his NEBOSH International General Certificate and passed as a result of his own hard work and the support of his course provider SHEilds Ltd.

Orkhan was able to surprise his employer by taking his Certificate to work one day, but what happened next was totally unexpected. Within hours, he saw a significant increase in his responsibilities and recognition.

Having seen the dramatic impact the qualification had made, he decided to carry on studying. This time he took the more specialist NEBOSH International Technical Certificate in Oil and Gas Operational Safety. Again he only informed his employers after passing and as before his responsibilities were broadened.

Orkhan draws an interesting parallel with the boxing trophies he collected, when he talks about his NEBOSH qualifications: “With these trophies, it is better to collect more and more. It shows your level of dedication, how hard you have worked and really lifts your status. I believe it is the same with NEBOSH. For me the International Certificate was only the beginning. I wanted to carry on and on.”

For his employers, Orkhan’s qualifications and those of his colleagues, play an important role. Their Certificates are displayed in the workplace and are always highlighted to clients and potential client companies. “It instantly helps to prove competence,” said Orkhan.

Unsurprisingly, he is now studying for his International Diploma. Orkhan has a wife and two young boys and says his family is his greatest motivation when it comes to gaining qualifications and furthering his career. “You know I’m doing this for them as well as for myself,” he explained. “I’m hopeful of an even better future for us all.”