Working for a charitable organisation often means far more than people realise, not just in terms of workload, but also in breadth of responsibility. 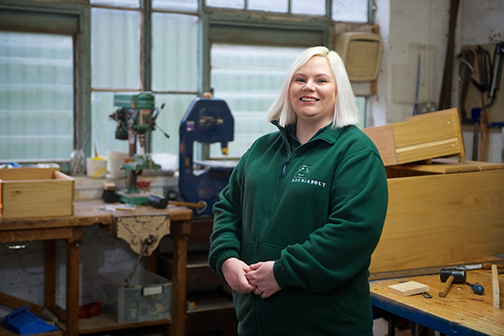 This is certainly the case for Teressa Brimm who is  Assistant Manager and Company Secretary at Roundabout, a charity which provides donated furniture to those in need. Her title hides a myriad of responsibilities, such as HR, administration, accounts and health and safety. For Teressa the charity is so much more than just the organisation she works for.

Roundabout won a Queen’s Award for Voluntary Service in 2019, in recognition of the dedication and commitment of its staff and volunteers. The Lord Lieutenant described the organisation as a “charity within a charity.” What this means is that as well as providing its core service of furniture donation, they also have volunteer placements for people who would struggle to access paid work. “Obviously we also have people here who are retired or are jobseekers, but the majority of our volunteers are suffering from a long-term health condition.”

“To be honest I actually feel like all of the staff and volunteers actually feel like they’re my extended family and the way people are supported here and given a boost is phenomenal. I started at Roundabout 10 years ago as an administrator with 5 GCSEs and I now have an A4 list of qualifications!”

When it comes to health and safety, smaller charities can sometimes struggle due to their often stretched resources and lack of knowledge and expertise. For people like Teressa and others who work for the charity a health and safety incident is not just a risk to colleagues, but could threaten the very organisation they feel so deeply connected with.

“In 2018 I saw an online post about the Charities Safety Group (CSG), which is backed by NEBOSH and helps charities with health and safety. I suggested to my manager that we might want to consider joining them to try and get a bit of additional support. So we took out a membership and not long afterwards I had an opportunity to apply for a NEBOSH scholarship. I love studying, so it was just a great opportunity for me, because I was already the health and safety committee chairperson

“I completed the application and was accepted straightaway. Libben Health and Safety, who are based in Walsall, agreed to put me through the National General Certificate free of charge and NEBOSH waived its examination fees. I took the course and was delighted to pass.”

Teressa added: “I have found completing the qualification incredibly helpful, particularly the understanding of health and safety legislation I have gained. Being able to put forward a strong argument to the trustees, management and also the volunteers themselves as to why health and safety is crucial.

“I’ve been able to share things like the potential financial and reputational implications of a failure which have strengthened the case for my recommendations.. Perhaps most importantly I feel confident in being able to keep what I see as my extended family safe from harm and ill-health because of the knowledge I have gained.

“I’d certainly recommend that other charities apply to secure this valuable funding. I am so grateful to CSG, NEBOSH and Libben for their support. It’s been fantastic.”

If you would like to find out more about Roundabout and the excellent ‘charity within a charity’ work it carries out, please visit http://www.roundaboutevesham.org.uk.

Health and safety ‘is about serving humankind’