Doha Mattar lives in Egypt, a country which is experiencing many political and cultural changes. Until recently, there were no more than a handful of women with the role she has - a Safety, Health & Environment Manager. 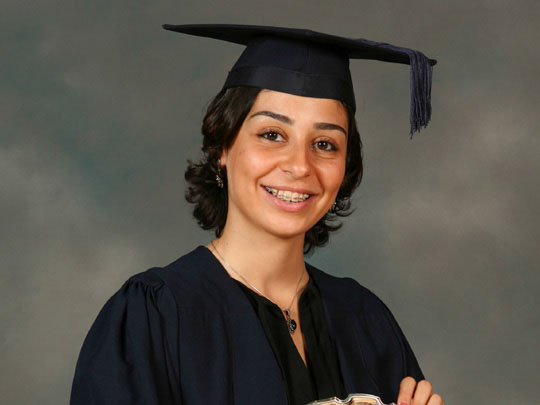 Doha works for the global food giant Nestlé in Cairo, at their Dry Goods Factory. She began working for Nestlé while at university in 2004, when she was studying for a degree in Chemical Engineering. She applied for summer training at one of their factories in the Engineering Department, as she thought this might give her some useful experience. Her performance during her internship encouraged them to offer her a part-time job so she could continue to work with them while finishing her studies.

She found that some people, particularly outside contractors, were a little surprised to find a young woman in such a role, but this did not stop Doha from performing well and influencing her colleagues. She quickly built up her experience and knowledge in day-to-day tasks and was promoted to Safety, Health and Environment Manager in 2009.

In 2010, Doha began to feel she needed a qualification to complement her growing experience in Occupational Health and Safety (OH&S). When she made enquiries within Nestlé she discovered that some of her colleagues throughout the world had taken the NEBOSH International General Certificate.

“I wanted to take an internationally and formally recognised OH&S qualification,” she told us. “When I found that my mentors in Egypt and headquarters in Switzerland believed this to be a very solid qualification which gives you all the basics and the fundamentals you need, I saw this as an important recommendation and decided it would be good to go on with that.”

She believed the NEBOSH International General Certificate course helped her a lot. “It reinforced my knowledge and I came back to work feeling I had more to offer to this post and field. After a certain time performing in your job you can sense ‘that’s it, I have the knowledge’ but I came back from this course feeling confident that I have yet much more to contribute to this function, to this factory, and to the entire company by what I’d learnt.”

She added: “It’s vital to have the knowledge-base that NEBOSH provides. You feel much more confident and secure in your career if you have a formal and internationally recognised OH&S qualification rather than just attending some one-day courses here and there and learning some basic skills and procedures.”

Doha not only passed her NEBOSH International General Certificate, but achieved the highest mark in 2010/11. She says achieving a NEBOSH ‘Best Candidate’ award has given her a lot of credibility and recognition both inside and outside of Nestlé.

And while Doha says she does not feel she is a pioneer for women in the field of health and safety in Egypt, she acknowledges she was one of the earlier few to join this field. She’s rightly proud of her qualification, her ‘Best Candidate’ award and to be part of what she describes as “the force of cultural change” in her country.

"I thought I understood fire and fire risk assessment until I took the NEBOSH Fire Certificate! "

NEBOSH talks to Igbon Oyakhire-Ijfijeh, QHSE Manager at ASB Valiant Limited in Nigeria, about his health and safety career and the part NEBOSH qualifications have played.

The Diploma provided opportunities for me to work in different industries

Cat Salt, Zero Harm Lead, Capital Projects and Asset Development (CPAD) at KiwiRail in New Zealand gave insight into what it has been like for her working in health and safety.