If you want to know what it’s really like to work in a dangerous, high pressure environment, talk to Darren Brunton. 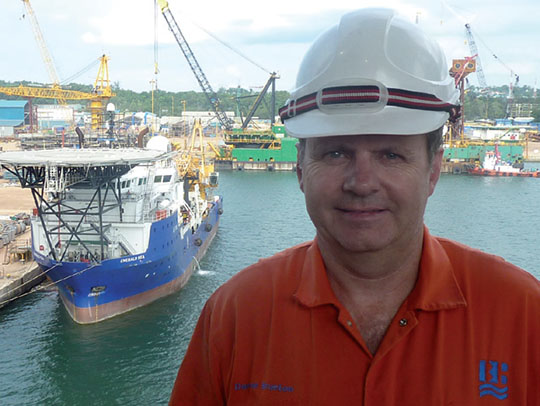 Darren first began diving with the military, serving with the Royal Engineers and the Army Commandos. Here, he learned not only how to dive, but how to work with explosives, carrying out demolition work underwater, as well as construction and welding. He went on to become a diving instructor at the Royal Engineers Diving Establishment (REDE) Army Diving School in Portsmouth.

This set him up well for a career as a commercial saturation diver when he left the army in 1990. A saturation diver works at depths of up to 100 metres or more for several days or even weeks. In rest periods, the diver stays in a dry pressurised environment, before returning to work. Working in the offshore oil and gas industry he travelled the world and worked in the oil and gas fields offshore of Malaysia, Indonesia, Thailand, Argentina, Mexico, Brunei, China, Vietnam, Holland and the United Kingdom to name a few.

Darren progressed to become a saturation diving supervisor. In this position he was legally responsible for divers working under his supervision. This meant he was responsible for risk management, planning and making sure all aspects from breathing gases to equipment and work tools and procedures were suitable for use.

Sometimes, Darren found that safety standards were not as high in commercial operations as they should have been. He witnessed several incidents and was almost killed himself on a couple of occasions. He decided he wanted to improve things and change mind-sets to help ensure fewer injuries and fatalities.

A subsequent discussion with an old school friend led to him discovering NEBOSH. His friend told him that anyone seeking a career in safety needed to have a NEBOSH qualification. Darren passed his NEBOSH General Certificate and went on to gain a Diploma in Occupational Health and Safety and subsequent Chartered Membership of IOSH. With these, his various diving qualifications and many years of experience, he was able to advance his goal of making commercial diving safer.

But diving is not all that Darren and his business has to offer.

Darren says his NEBOSH qualifications opened doors for him. Demand for training is high in the emerging markets of the Far East, and his company extends the goal of taking safety to great depths by conducting NEBOSH training in several Asian countries and the USA. NEBOSH has not only helped him achieve his goal of improving diver safety, but has also played an important role in him launching a highly successful business.

As for that old school friend of his, they spoke recently, and apparently he followed a different career path. He told Darren he wished he’d gone down the safety route!

Health and Safety is a profession that requires real passion!