Credit where Credit is due!


With the role she has and the qualifications she’s gained, it’s hard to imagine that Jody Sandilands could have once lacked confidence and self-belief in her academic capabilities. 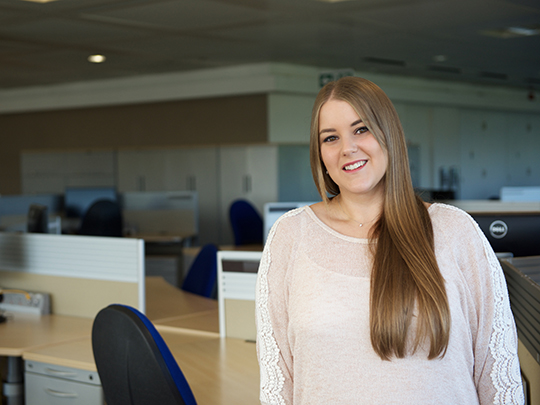 Around fourteen years ago, it was this lack of confidence coupled with uncertainty of a desired career, which led Jody to consciously decide to apply herself straight from school into a working environment. She hoped this decision would help her to build her confidence, gain experience and open doors which would guide her on to a suitable career path.

Now Jody is a Senior HSE Specialist with Wood Group – an international energy services company, which operates in more than 40 countries. So what has brought about these changes for Jody? When she left school Jody had no clear idea of what she wanted to do; she just knew she wanted to help care for people. She held a number of administrative roles in a variety of industry sectors before being given the opportunity that kicked started a career that has allowed her to achieve this.

Jody was appointed HSE co-ordinator and found the role interesting and rewarding. She learned a great deal from the in-company training and mentoring provided and her confidence grew. She decided she was ready to take a formal health and safety qualification and chose the NEBOSH National General Certificate in Occupational Health and Safety. Jody utilised the experience gained working in various industry sectors and applied this to her studies. When her results came through Jody was delighted to discover she had passed with a Credit!

This success helped Jody secure her role with Wood Group. The company operates with a clear set of values that makes ‘Safety and Assurance’ its top priority. Second on its list of values is its ‘People’. Wood Group aims to “attract, develop and retain the best people” and for Jody this meant encouraging her professional development. Jody went on to pass with Credit both the NEBOSH Certificate in Environmental Management and NEBOSH National Diploma in Occupational Health and Safety. So Jody has passed all three of her NEBOSH qualifications with Credit.

Jody is rightly delighted with her success, “I am so pleased I challenged myself to achieve what I once doubted I could. When I opened my final Diploma results I was delighted as it was the culmination of two years of hard work and dedication.”

She has gained a great deal from her studies. As well as far greater confidence to work autonomously, Jody says her NEBOSH Diploma has provided her with the knowledge, tools and understanding to identify where improvements are needed and to independently develop and implement new systems and procedures. She is very proud of one project she undertook following her Diploma, which looked at improving health and safety communication and consultation with local employees and proposed a number of changes.

“Six months after implementation we saw a huge increase in employee engagement and participation and the quality of the new processes were formally commended by our external OHSAS 18001 certification auditor as ‘some of the best he has seen’.”

Jody has not only benefited from Wood Group’s core values, but is clearly making an important contribution towards achieving them.