In 2007 two lads and a dog from a small fishing town in the North East of Scotland set out on a mission to change the world of craft beer. Martin and James wanted to make other people as passionate about great craft beer as they are. And so BrewDog was created. 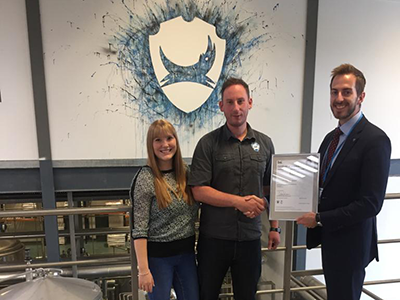 In the first 10 years of the dog, the business has shaken up the beer market, challenged big beer and redefined the craft sector.

Some would describe BrewDog as a disrupter business with clever branding and punchy marketing campaigns. Last year it produced 350,000HL of amazing craft beer, with the business pushing hard towards the 1 million marker at hyper speed!

But it’s not just about beer. John Fairclough (pictured centre), Group HSE Manager, explains how the business is also leading the way in health and safety…

The key for success at BrewDog is two simple things; BEER and PEOPLE.

I joined the business three years ago, and in my role I have the responsibility to ensure we protect our crew, visitors and deploy a positive HSE programme that can support rapid growth.

To keep people safe and truly embrace a positive safety culture through all levels of the business we decided to test ourselves against the new ISO 45001 standard. I previously worked with OHSAS 18001 and ISO’s 9001 and 14001, so when I started at BrewDog I designed the key elements of the HSE management system with certification in mind.

The initial plan was to apply for OHSAS 18001 but with the release of the much-anticipated ISO 45001 just around the corner we decided to wait and be the first to apply for it.

As a business we wanted to test ourselves against our core values of Beer and People; ISO 45001 ticked the people safety systems and we also decided to apply for FSSC 22000 to cover our food safety management systems.

It was certainly a challenge going for two certification standards at the same time, but an integrated approach to management systems set us up well for this challenge.

In March 2018, after three months of planning we undertook both stage one assessments and we were advised that the management systems we had in place were ready for the test of a stage two audit review.  For anyone who doesn’t know the certification process, stage one is looking to establish if the management system meets the standard and is present in the business.

Stage two is a tougher test as the auditor is looking for evidence that the management system has been implemented. For BrewDog this meant they went out onto the production floor and gathered evidence by speaking to employees at all levels of the business.

The stage two audit for ISO 45001 lasted 4.5 days, with one auditor on the first day, two auditors for three days and back to one auditor for the final half day.

It was certainly a challenge with two auditors gathering evidence speaking to the Production crew and requesting evidence to support their observations.

Auditors will assess you on how quickly the information is available to establish if your systems are effective. It certainly helps to be organised and be very familiar with the clauses and what evidence you have to satisfy a particular requirement.

The biggest changes within the new standard is the alignment of ISO 45001 to the same high-level structure as ISO 9001 and ISO 14001.  The good news is that if you already have one of the other standards you will be fulfilling some of the requirements of ISO 45001.

There is a focus on management commitment, worker involvement and carrying out a context review of the organisation to establish inputs, outputs, interested parties, and set objectives in line with the needs and expectations of the business.

If you carry out a context review, it will enable you to identify risk and opportunity and potential objectives that will cover these needs.  It will also generate some good documented evidence of compliance that will help you in the audit process.

How did we get ready? The simplest things work the best.  We decided to produce a countdown 10 weeks from the ISO 45001 stage two audit.  The idea was to share key points about our management system and the standard with the team.  Posters were put up all over the facility in the control rooms, canteen and in high footfall areas in the office and displayed on TV screens.

It had the desired affect with the team asking questions, checking knowledge and wishing us good luck as the countdown ticked down to one week to go.

After all the planning and audit, which was at times intense and a real test on the management systems at BrewDog, we were awarded both standards.

BrewDog became the first manufacturer to successfully meet and achieve the requirements of ISO 45001, which is definitely worth celebrating with a cold can of Punk!