It all started with: ‘NEBOSH, what’s that all about?’


Where do you begin if you want to transform your day-to-day job, which appears to lack any clear progression route, into a full-blown professional career? 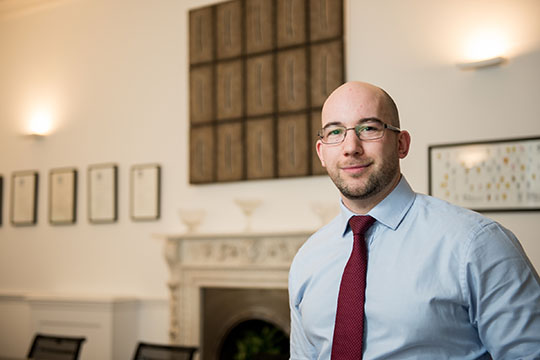 For Barry Bloomfield, the starting point back in 2012 was to go online and scan through a few recruitment websites. At the time, he was working as a security officer and although Barry enjoyed his job he couldn’t really see any future advancement.

“I’ve always been fairly ambitious, so I was regularly looking on job sites just to find out what people were looking for in candidates for security management,” Barry explained. “I kept seeing ‘NEBOSH’ come up, and so I naturally thought well what’s all that about?”

Fast forward to 2016, and Barry now has a highly satisfying and autonomous role as a Heath and Safety Advisor with Graff Diamonds in London. He is working towards both a NEBOSH National Diploma in Occupational Health and Safety and a bachelors degree in Occupational Safety, Health and Environment and his sights are firmly set on Chartered Membership of IOSH. Quite simply, his curiosity for finding out more about NEBOSH not only transformed his career, but his whole future outlook.

Barry left school aged 16 without any qualifications. He immediately pursued his boyhood ambition of serving in the Army by joining the Household Cavalry. While he loved being a soldier, after a few years he began to do more “ceremonial work,” which he described as “not really my cup of tea”. By his early twenties he decided his childhood ambition had essentially been fulfilled and decided to work in private security instead.

Barry finally settled in a job with Graff Diamonds. Graff is a company that is involved in every stage of the luxury jewellery making process - from the sourcing of a precious rough stone, through to the cutting, polishing and final setting of each diamond. The need for robust security requires little explanation.

Barry’s initial role at Graff was more to do with being a hands-on physical presence, rather than management or strategic operations - which was where he really wanted to be. His subsequent discovery of NEBOSH in 2012 led him to self-fund and pass his NEBOSH National General Certificate in Occupational Health and Safety. He then immediately took advantage of the common-units feature of our Certificate qualifications by taking his NEBOSH National Fire Safety and Risk Management Certificate without needing to sit unit NGC1 again.

At this time, Graff was growing rapidly into a much larger international organisation. There was a strong need for more formal and streamlined health and safety processes and Barry began to take on more and more responsibilities in this area. When a significant property renovation took place, Graff Diamonds funded Barry to take his NEBOSH National Certificate in Construction Health and Safety to help broaden his understanding of CDM.

In essence, both Graff and Barry grew together, to the point where the need for a full-time Health and Safety Advisor was recognised and Barry’s contribution was rewarded. He now has the professional career he wanted and his NEBOSH National Diploma in Occupational Health and Safety will undoubtedly mark a further step in his personal progression. At the same time Graff have been able to manage health and safety in-house, without having to employ lots of external consultants, which is often the case when organisations grow exponentially.

“At Graff, we’ve recently been granted an International Safety Award by the British Safety Council,” Barry told us. “In addition, a lot of people I’ve worked with in the past now seem very interested in what I do. I’m trying to recruit my own little army of health and safety practitioners and I always say to people ‘start with NEBOSH’ because that is how it all started for me.”